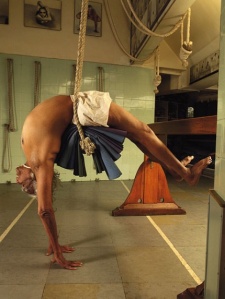 B.K.S. (Bellur Krishnamachar Sundararaja) Iyengar, 88, is the father of the yoga that bears his name. (The Oxford Dictionary of English defines Iyengar as “a type of hatha yoga focusing on the correct alignment of the body, making use of straps, wooden blocks, and other objects as aids to achieving the correct postures.”) From his Ramamani Iyengar Memorial Yoga Institute (named for his late wife), in Pune, India, he presides as the unofficial pope of the yoga world. More than anyone else, he is responsible for making the complex asanas—or poses—accessible to people all over the planet. Before Iyengar, yoga was largely passed down from master to student. Now, thanks to him, it is taught in Indian public classes and schools. Photographed at the Ramamani Iyengar Memorial Yoga Institute, in Pune, India.